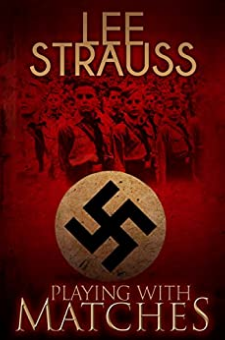 Praise for PLAYING WITH MATCHES: "Illuminating.""Gripping, entirely credible and a page-turner. Recommended."Heinz Schultz's word could send a man to prison. Though only a youth of fifteen, he was strong, tall, and blond. The boys in his Deutsches Jungvolk unit esteemed him and feared him.And they wanted to be just like him.Emil Radle wanted to be just like him.A dedicated member of Hitler Youth, Emil was loyal to the Fuehrer before family, a champion for the cause and a fan of the famous Luftwaffe Airforce.Emil's friends Moritz and Johann discover a shortwave radio and everything changes. Now they listen to the forbidden BBC broadcast of news reports that tell both sides. Now they know the truth.The boys along with Johann's sister Katharina, band together to write out the reports and covertly distribute flyers through their city. It's an act of high treason that could have them arrested—or worse.As the war progresses, so does Emil's affection for Katharina. He'd do anything to have a normal life and to stay in Passau by her side. But when Germany's losses become immense, even their greatest resistance can't prevent the boys from being sent to the Eastern Front.****Available in German as Gefährliche Zettel****What readers are saying:"Using actual real-life stories from those who lived through it, Lee Strauss paints a bleak picture of fear and survival. Her characters seem real and jump right off the page.""A real page-turner. If you like a good story and great history, read this book.""An interesting perspective from the "other" side of the Holocaust.""This is novel is an outstanding novel depicting the viciousness if the Nazi regime....Lee Strauss presents an unbelievable report on child abuse of the children "drafted" to serve the crazy sicko from Bavaria. This is a great read and I highly recommend your reading it.""So moving, heartbreaking. A startling reminder of what happens when evil is allowed to bloom."***Enjoy reading this well-researched, dramatic story of what it was like to be a teenager in Hitler's Germany. A slightly different perspective than many world war two novels.Author InterviewWhy did you feel compelled to write Playing with Matches?It started a few years ago when a friend of ours sat on our couch and started telling us his story from when he was a young teenager in Hitler Youth and what happened to him directly after the war. It was very compelling and told from a different angle than any world war 2 novels that I had seen. Most books and movies tell stories of world war two heroes who were fighter pilots or soldiers in the field. Not many focus on the young people who bravely resisted from inside the ranks of Hitler's Youth.