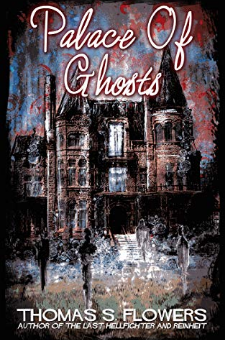 Evil resides in Amon Palace. Something worse came to visit. Four veterans of the Iraq War seeking a cure for Post-Traumatic-Stress Disorder arrive at a notoriously haunted house in the bogs of Galveston Island called Amon Palace. Samantha Green, a friendless former Army K-9 handler looking for a way to put her loss behind her. Brad Myers, a lighthearted former Military Police Officer severally wounded in war wanting nothing more than a good nights sleep.Andy Lovejoy, an overweight light spoken drone operator who once watched the war from above now questions who he has become. Marcus Pangborn, a headstrong Marine who desperately wants a dead friend’s forgiveness. The group joins Doctor Frederick Peters, an experimental psychologist looking to prove his exposure theory hypothesis, and his two assistants, Tiffany Burgess and Dexter Reid. At first, their stay seems to conjure nothing more than spooky encounters with inexplicable phenomena. But Amon Palace is gathering its powers—and soon it will reveal that these veterans are not who they seem.