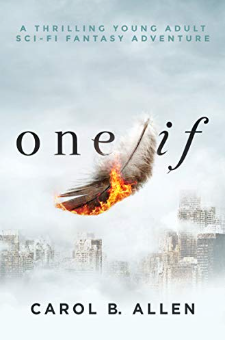 In this race against time, three teens with powers that defy science take on a warring planet destroyed by climate change. But will they return home? Trapped in an epic time/space confrontation, the trio battle destiny. Alliances are betrayed. Unlikely friendships are forged. And young love flourishes in a race against impossible odds in this thrilling young adult sci-fi fantasy adventure.

When Parker Kittredge, a quirky science student from New York City, is lured to her terrace by a frisky hummingbird, she slips and plunges 18 stories to the street. She awakens in Spyridon, a planet destroyed by climate change and locked in a civil war. Parker quickly discovers she is not alone. Two other teens have also been kidnapped and they must join forces to save the planet if they have any chance to return to Earth.

The teens' struggle for survival is fierce: murders, deceptions, power plays, love triangles, and magical fantasy elements make this a high-stakes, coming-of-age adventure pitted against a race with time.

Reviews for One If:

“An epic fantasy adventure that will thrill anyone who reads it.”-Online Book Club

“The world-building was compelling and the environmental themes are timely.”-Bianca Marais, best-selling author of Hum If You Don't Know the Words

“I was so wrapped up in it and invested in all the characters. I love how each character is so strong but also has a vulnerable aspect to them. I need to know, do they save the planet?”-Dr. G. Liu

“A well-written, fast-paced YA Fantasy with a relevant message. One If will inspire girls to embrace STEM--science, technology, engineering, and math . . [and] widens the lens on the impact of climate change, something we all need to know more about.”-Ilene Slutsky, Librarian

The Virago Fantasy series are for everyone interested in the thrill of an adventure and our planet’s sustainability. The books are especially for teens and young adults interested in Science, Technology, Engineering, and Mathematics (STEM).

Rich in vivid imagery, intrigue, and suspense, you’ll find yourself laughing, crying, and cheering on Parker, Edison, and Henley in this fast-paced YA fantasy. Fans of The Hunger Games, Divergent, or Stranger Things who want to delve into a thrilling adventure will love this book!