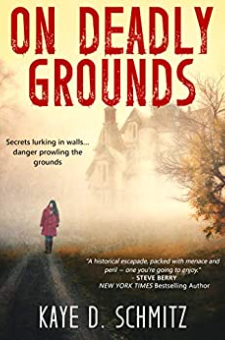 On the eve of an international G7 Summit, event coordinator Mattie Maguire discovers that the venue, a century-old estate close to Asheville, NC, is more than simply a picturesque setting. It is also the center of political conspiracies involving a ruthless Russian spy ring that will stop at nothing to steal the massive fortune they believe to be hidden there. The search intensifies and a rogue Russian agent attacks Mattie’s grandmother, still living on the estate. She hovers in a coma, barely clinging to life. As Mattie struggles to protect her family and ensure a safe event for the most important leaders in the world, her discovery of a fraudulent heir to the estate puts her own life in danger as well. But when her eighty-five-year-old grandfather is kidnapped and held at gunpoint, her path becomes clear. Despite her fear, she must locate the only person who has the information the Russians seek—the estate’s rightful heir, hidden away for decades after the murder of his father. But will the true owner’s return to his childhood home put his life in danger, too?? A Word From the Author?Reluctant heroine overcomes her crippling fear to face Russian spies and an international contract killer. On Deadly Grounds, a 2020 new release, refers to every step taken by widow Mattie Maguire — whether it’s in her fictional small town close to Asheville, NC, where dark conspiracies transform the global political event she’s planned into a series of death threats — or Corfu, Greece, where her investigation into an absent landowner exposes the crimes of a dangerous felon. Readers, especially women's detective fiction and crime fiction readers, and those who enjoy popular political suspense, new spy novels, and best selling conspiracy murder thrillers, will appreciate the intricate plot lines and suspense-filled twists and turns. Join Mattie as she fights her inner demons while battling deeply-held secrets that continue to haunt her. Help our flawed, amateur sleuth, locate a missing heir and solve a decades-old murder, while racing the clock to save her kidnapped grandfather from certain death.