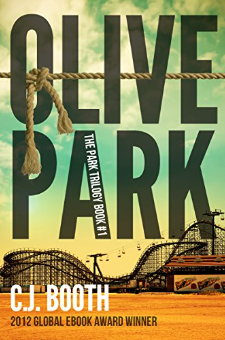 ***** Awarded Best Mystery - Global E-Book Awards *****They solve cold cases. But the murderer they’re hunting may be warming up for more.Sacramento Police data expert Mallory Dimante refuses to give up on her long-lost brother. So she lies her way into the new Ongoing Investigation Division and attaches herself to two cynical detectives. Hoping to blow open an unsolved child-killer case, Mallory sparks a frenzy of activity when she discovers evidence that the perpetrator may still be at large.With her legwork taking her to a dilapidated amusement park, it stuns the determined woman when she uncovers a trail of clues leading back to her brother’s disappearance. And after another child vanishes, she remains no closer to stopping the fiend…Can Mallory unmask the murderer, or will they all end up in a shallow grave?Olive Park is the first novel in the pulse-pounding Park Trilogy murder mystery series. If you like split-perspective stories, fascinating locations, and thrilling tension, then you’ll love C. J. Booth’s award-winning roller-coaster ride.Buy Olive Park to strap in for a wild whodunit today!