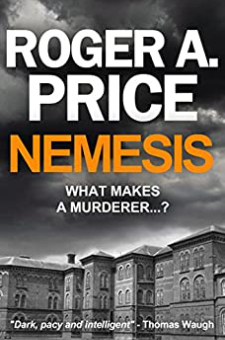 The body count is rising…When psychopath Daniel Moxley makes his escape while being escorted to Broadmoor high security prison, he sets off on a trail of bloody revenge, leaving police forces throughout the north of England floundering in his wake.Moxley’s paranoia has him seemingly selecting victims at random; police, prison warders and even old ladies have been the target of Moxley’s cold-blooded murder spree. When Detective Inspector Vinnie Palmer is assigned to the case, he pairs up with Moxley’s psychiatrist to delve deeper into the man’s criminal past, uncovering a history of corrupt police, sexual coercion and gaol brutality. But the killer always seems to be one step ahead, leaving a trail mutilated bodies in his wake.As Vinnie closes in on Moxley and takes the law into his own hands, he ends up suspended and stripped of his police powers. Determined not to let Moxley escape justice, Vinnie continues his pursuit of the maniac as a private citizen. Lured on by Moxley’s taunts, Vinnie discovers that the real threat may be closer to home than he first imagined.The action-packed and full of gruesome detail, Nemesis is Roger’s first story in the new Badge and the Pen series that features detective inspector Vinnie Palmer.Roger A Price is a crime fighter turned crime writer who spent more than thirty-one years in the police force. He served across the UK, Europe and the Far East before retiring as a detective inspector in charge of a covert undercover drugs unit that achieved national acclaim.