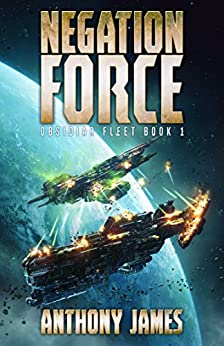 Negation Force. A planet without power, locked down by an alien war fleet.
The human Confederation has known an unprecedented time of peace, unheard of in a universe where every other species is not only technologically advanced, but also incredibly hostile.
The good times are about to end.
Out on the fringes, the planet Atlantis is attacked by an alien foe remembered only by the oldest members of the Space Corps. These aliens – known as Vraxar – are abominations of flesh and metal, driven to exterminate every other life form in the universe. Now it’s humanity’s turn.
In the ruins of the Tillos military installation, Sergeant Eric McKinney is determined to fight back and find out why the Vraxar have come. Meanwhile, a response fleet is mustered with the intention of facing the enemy head-on. It’s a mission with no hope of success.
As events unfold, it becomes apparent the Vraxar have secrets which give clues to their purpose. The answers are more shocking than anyone could have imagined.
The lives of strangers are intertwined and together they must try and salvage something from this first exchange in a war that will not end until one side is utterly defeated. Luckily, the Tillos base holds secrets of its own…a warship with an exceptionally powerful Obsidiar core is contained within an underground bunker. It is the only hope for Atlantis…
Negation Force is a science fiction action and adventure book which begins The Obsidiar Fleet series.
Author’s Note: this book is set forty years after events in the Survival Wars series. There is no necessity to read the earlier books to enjoy this one.