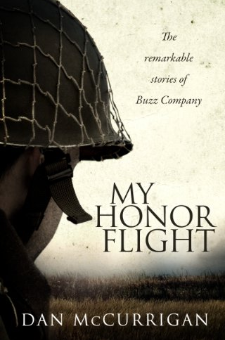 This novel tells the story of a young soldier who accompanies his great-grandfather, Doug Mackinack, on an Honor Flight – a sponsored trip to the World War II Memorial in Washington D.C. During the flight, the old man shares stories from his platoon's tour in Europe, many ending in dramatic (or occasionally, humorous) twists.The stories share not only suspenseful situations, but also the emotional impact of the platoon's journey through a broad range of humanity: Fear. Courage. Compassion. Anger. Love. Death. Loyalty. Mercy. Retribution. In a final defining moment near the end of his tour, Mackinack is forced to decide his path in a split second. Will he return to the man he was before the war, or will he become the killer the war created?When Mackinack and his great grandson reach the monument, there is one final surprise tied to events sixty six years earlier.