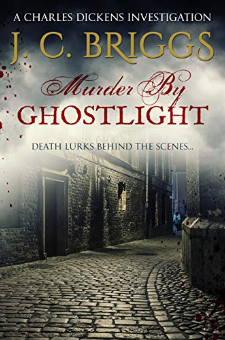 Join Charles Dickens on another crime-solving adventure! Perfect for fans of Sherlock Holmes, Victorian crime mysteries, A Christmas Carol and David Copperfield… Dickens has gone from private investigator to prime suspect… London, 1850Charles Dickens is in Manchester, performing at the Queen’s Theatre with his acting group.But his career on the stage is cut short when a man is shot dead – on set.With Dickens himself caught with the gun in his hands, he is immediately arrested.Along with the help of his good friend Superintendent Sam Jones, Dickens must do all he can to find the real killer, before he is locked up for a crime he didn’t commit. Can Dickens convince the authorities of his innocence? Will he unmask the true assassin? Or will there be another Murder by Ghostlight…? Murder By Ghostlight is the third urban mystery in J. C. Briggs’ literary historical series, the Charles Dickens Investigations, a traditional British detective series set in Victorian London. ‘a fast-paced and page-turning tale. This cleverly written Victorian mystery will have broad appeal. Highly recommended’ – Historical Novel Society‘an eloquently written suspense murder thriller, in the genre of Sherlock Holmes ... foggy wet England – is so well described that one shivers as one turns to the next page and looks forward to that warm cup of tea’ – Author Spotlight Magazine‘Briggs has captured Dickens’ gift of caricature and sense of the ludicrous side of life. That, taken with the social comment, still as relevant as when he was writing, plus a modern plot, make this a story well worth reading’ – Crime Review‘another enjoyable book from J. C. Briggs with its fascinating characters, real and imagined, its intricate mystery and its evocation of Victorian London and Manchester’ – Promoting Crime FictionThe Charles Dickens Investigations Series:BOOK ONE: The Murder of Patience BrookeBOOK TWO: Death at Hungerford StairsBOOK THREE: Murder by GhostlightBOOK FOUR: The Quickening and the DeadBOOK FIVE: At Midnight In VeniceBOOK SIX: The Redemption MurdersBOOK SEVEN: The Mystery of the Hawke Sapphires