Mrs Hudson and the Spirits’ Curse 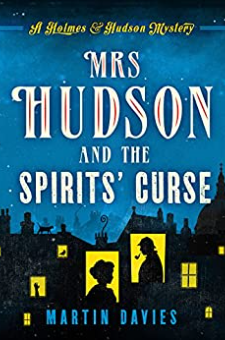 What if Baker Street’s most gifted resident wasn’t called Sherlock Holmes?An evil stalks London, blown in from the tropics. Stories of cursed giant rats and malign spirits haunt the garrets of Limehouse. A group of merchants are, one by one, dying. The elementary choice to investigate these mysterious deaths is, of course, Holmes and Dr Watson. Yet the unique gifts of their housekeeper, Mrs Hudson, and her orphaned assistant Flotsam, will be needed to solve the case. Can she do it all under the nose of Sherlock himself?From the coal fire at Baker Street to the smog of Whitechapel and the jungles of Sumatra, from snake bites in grand hotels to midnight carriage chases at the docks, it’s time for Mrs Hudson to step out of the shadows. Playfully breaking with convention, Martin Davies brings a fresh twist to classic Victorian mystery. Martin Davies grew up in north-west England. All his writing is done in cafes, on buses or on trains, and all his first drafts are written in longhand. He has travelled widely, including in the Middle East, India and Sicily. In addition to the Holmes & Hudson Mysteries, he is the author of four other novels, including The Conjurer’s Bird, which sold over 150,000 copies and was selected for the Richard & Judy Book Club and Havana Sleeping, which was shortlisted for the 2015 CWA Historical Dagger award. He works as a consultant in the broadcasting industry.