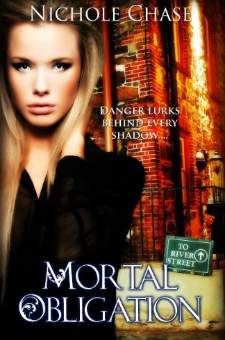 From New York Times and USA Today Bestselling Author...Ree will face the darkest form of betrayal before the year is out.Seventeen year old Ree McKenna has three goals: get through high school, convince her crush she is more than his best friend's little sister, and save money for college. Fate, though, has other plans for her. After the untimely death of her older brother, Ree is haunted by dreadful nightmares and terrifying visions. To make matters worse, Ree has started to suspect that something dangerous is stalking her from the shadows. A night full of frightening surprises leaves Ree with unsettling news. Gifted by the gods with unusual powers, she must devote herself to a battle that could very well lead to not only her death, but the demise of everyone she knows and loves. After all, Ree is the only mortal standing between the Earth and utter darkness.Set in Savannah, Ga, Mortal Obligation is the first book of The Dark Betrayal Trilogy.EXCERPT: He sighed and smiled a little. "Ree, you are so beautiful. Do you know that? It makes it impossible to think of you as I should. But I'm trying to keep my promise. I'm supposed to take care of you like a sister. I don't think Tristan would appreciate it if I did what I want to do." His cheeks colored a little, and he looked down at the ground. "God, I'm so lame." "What makes you think his sister would appreciate it?" His face looked horrified, so she smiled to let him in on the joke. "Really, you think I'm beautiful?" "Very." His fingers were gentle as they brushed the hair out of her eyes and lingered on her cheek. Unconsciously she leaned into his hand and sighed. Several moments passed while they stood like that, still and lost in their thoughts. Carefully, she raised her hand and laced her fingers through his. Leaning down he rested his forehead against hers, and her heart thumped in her chest. A small smile played along his lips and she blushed. "You can hear that, can't you?" "Mmhmm." "Not fair," she whispered. Lifting their entwined hands, he placed her palm on his chest. The warmth of him flowed up her arm, leaving a wave of heat behind. Standing very still, blood rushing in her ears, she could feel his heart beating under her fingers. When she shifted closer to him the rhythm spiked, and it was her turn to smile. ----------------------------"There is modern coolness, theatrical tension and old school romance that that makes you root for the characters." -Dean Mayes"I was really excited to get into Ree's world after reading the summary of Mortal Obligation. And my excitement was generously rewarded as I was swept up in this great story." - Courtney, Fuzzy Coffee Books"Mortal Obligation is definitely a must read book that you're going to love." -Mandy, I Read Indie