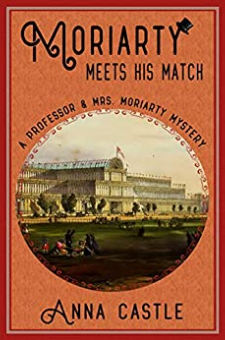 Professor James Moriarty has one desire left in his shattered life... revenge.<>All he wants is to shame the man who ruined him and stop the brute from harming anyone else. Then he meets amber-eyed Angelina Gould and his world turns upside down.An exploding steam engine kills a man at the International Exhibition. While Moriarty examines the wreckage, Sherlock Holmes appears, sent to investigate by Moriarty’s enemy. Holmes finds evidence that points at Moriarty, who realizes he must either solve the crime or swing it for it himself. He soon uncovers evidence of fraud and an unscrupulous company promoter. As he pursues those leads, he bumps into the alluring Angelina at every turn. She’s playing some game, but what’s her goal? And whose side is she on?Between them, Holmes and Angelina push Moriarty to his limits -- and beyond. He’ll have to lose himself to save his life and win the woman he loves.