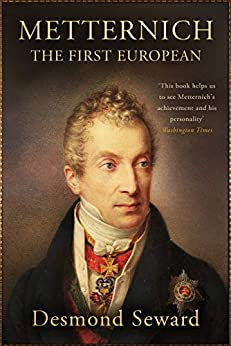 While the European Union is a relatively new phenomenon, it is not a new idea.
Klemens von Metternich - the statesman who destroyed Napoleon and directed Habsburg Austria’s policy for nearly forty years - tried, in the nineteenth century, to build his own form of European unity in order to create lasting peace.
From 1815 until 1848, the Austrian Empire was the strongest power in Europe; not only the Habsburg domains, but Germany and Italy were also ruled from Vienna. And Metternich, through the sheer brilliance of his diplomacy and unswerving concentration on preserving the balance of power, was instrumental in maintaining Austria’s dominance. He brought the Austrian Empire safely through the Napoleonic maelstrom and his diplomatic brinksmanship at the Congress of Vienna, which saved Europe from another continental war for a hundred years, was legendary. As was his role in creating the European Alliance, which prefigured the League of Nations and NATO.
Desmond Seward’s biography, which is based firmly on scholarship and includes previously unpublished material, tells the story of a very great statesman. Metternich’s hatred of war and chauvinism, faith in the old Christian Europe and diplomatic genius are worth remembering at a time when Europe is striving for unity once again.
Praise for Metternich:
An excellent biography that is openly sympathetic, but at the same time comprehensive enough to be convincing. Seward's prose is lovely, and this book is simply a joy to read’ - Goodreads review
'Few characterisations are as refreshing and positive as Seward's ... The book relies heavily on Metternich's personal and state papers and contains superb sections on his rather tragic daily life' - Library Journal
Desmond Seward was born in Paris and educated at Ampleforth and at St. Catharine’s College, Cambridge. He is the author of numerous historical studies and biographies, on subjects that include the Hundred Years War, Henry V, Napoleon and Hitler.