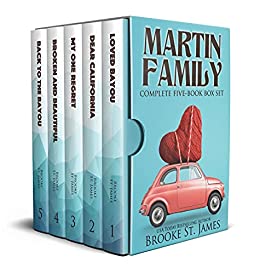 Take a trip to Louisiana and get swept away in the romance of it all as the members of the Martin family each find their happily ever after. The Martin Family box set is a complete series that contains five full-length, sweet romances by bestselling romance author Brooke St. James.

Book One - Loved Bayou: Jacob Fox, son of the notorious Neil Fox, wanted nothing more than to disappear. There had been a media frenzy during the arrest of his parents and their subsequent deaths, and Jacob couldn't escape all the negativity surrounding the ordeal. He decided to buy a house in south Louisiana on a private, wooded lot in the middle of the bayou so he could drop off the face of the earth for a while.

He certainly hadn't come to Louisiana to make friends.

That seemed to be working pretty well until he met Alex Martin. She simply wanted to offer a little southern hospitality at first, but eventually she realized she might be the only person who could help Jacob rediscover the man he used to be.

Book Two – Dear California: Martin Outfitters had a potentially lucrative partnership in the works with a clothing company based in California. A face-to-face meeting with the owner was all they needed to seal the deal. Cole Martin was confident he could take care of business, and he offered to make the trip.

When his father suggested he take a vacation on the West Coast after the meeting, Cole refused. He was solely focused on securing the partnership so he could get back home.

Everything was going according to plan, until he met Olivia.

"Rescue me," was the first thing she said to him, and well, with Cole being a Southern gentleman and all, that was exactly what he did.

Book Three – My One Regret: Wynn Martin had an opportunity to move to Austin and fulfill her dreams as a musician. Although it meant she'd have to drop out of school and leave her friends and family behind, she felt like it was the right decision. She also trusted that her new boyfriend would help make it a smooth transition.

But sometimes change comes hard and swift and leaves you feeling blindsided. Wynn was about to discover this reality.

It was in the midst of this storm that she realized she needed to deal with her biggest regret. If she could only set things straight with Ryan Collins, everything might return to normal.

Book Four – Broken and Beautiful: Claire King wasn't really the type of girl who was looking for romance. She had to deal with some issues from her past before she could even begin to think of getting into a serious relationship.

Though she had grown up with the Martin boys, Claire never entertained the idea of a romantic encounter with either of them. In her mind, they were off limits. In fact, some might even say they were out of her league.

When an interesting chain of events ignites a hidden spark with Cam Martin, Claire would begin to question everything she knew about herself. Ultimately, it seemed that loving Cam was not an option. But convincing herself of that might prove to be harder than she expected.

Amelia Martin was the youngest of three girls. Both of her older sisters had already found their soul mates, and Amelia felt like she was well on her way to that with Hank Marksberry.

Hank seemed to have everything she was looking for. He was handsome, intelligent, and would undoubtedly have a successful career. Amelia decided to bring him home during Christmas break to meet her family, thinking it would be the beginning of their happily ever after.

The only problem was that Hank could never compare to Caleb Reeves. When Caleb unexpectedly appeared at the airport to offer Amelia and Hank a ride, she was faced with a lifetime of memories and feelings she had managed to avoid since she'd left home.