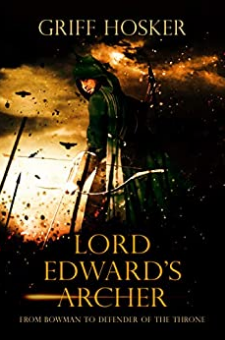 , NOW***‘Medieval adventure with the pace and power of a war arrow in flight. Griff Hosker has sold over a million books and I can see why!’ – Matthew Harffy, bestselling author of the

To young Gruffyd, life has been unkind. Eking out a meagre living with his father, he has learned very quickly how to look after himself in the hostile borderlands.His father, an archer, has taught him well and at seventeen Gruffyd is a keen and able bowman. Young, loyal and skilled, it’s not long before Gruffyd finds himself following in his father’s footsteps, working as an archer in the bordering castle. But tragedy strikes when his lord commits a devastating deed, and Gruffyd is forced to make a life altering decision.This is the story of a young archer’s riotous journey from avenging outlaw to merchant’s bodyguard to, finally, the captain of archers for the heir to the throne. Gruffyd must prove not only his own worth, but the importance of archery in some of England’s most decisive and ruthless battles.

What everyone is saying about the

"What's NOT to like? Knights, princes, outlaws, and one very clever archer."

"This is certainly a Griff Hosker book. Lots of battlefield action, but built on historical English history like his many other books"

"If you are a fan of Bernard Cornwell, then you will love these books."

"I thoroughly enjoyed this book. It is well worth the read and the history lesson. If you like books by Bernard Cornwell, you will really like this book."

"Cannot wait for the next book in the

‘From the first page to the last,

grabbed me and did not let go. Hosker’s depiction of life and struggles in that slice of early English history is real, brutal and utterly captivating.’ –

qualified as an English and Drama teacher in 1972 and worked in the North East of England for the next thirty-five years. During that time he wrote plays, pantos and musicals for his students. He then set up his own consultancy firm and worked as an adviser in schools and colleges. The financial crash of 2010 ended that avenue of work, and he found that he had time on his hands. Griff started researching the Roman invasion of Britain and began to create a novel. The result was