Looking at the Lights: My Path from Fan to a Wrestling Heel 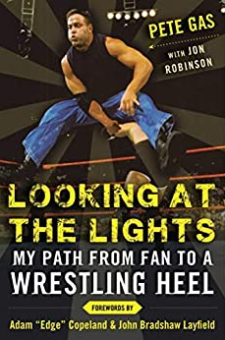 How did an untrained former college football player end up in the middle of a ring, wrestling during the highest-rated segment during the WWE’s acclaimed Attitude Era?That’s the story behind Looking at the Lights. As a childhood friend of Shane McMahon, Pete Gas was given the opportunity most only pray for. Beginning with appearances to interfere in McMahon’s matches, his role blossomed into becoming a full-fledge wrestler and leading the Mean Street Posse to WrestleMania, becoming one of the most fascinating success stories of the era.From his humble upbringing and friendship with Shane (and the McMahon family as a whole), Gas shares how a 9-to-5 average Joe got the chance of a lifetime and made the most out of it.But getting your foot in the door is one thing; staying is a completely different animal. With all eyes on him, knowing his lack of training and meal ticket being the boss’s son, Gas knew he had to win over all those doubters: from the fans and announcers to the wrestlers themselves.Knowing he had to prove himself, Gas took beatings, chair shots, and additional training to not only show that he could wrestle, but that he belonged with such superstars as The Rock, “Stone Cold” Steve Austin, and The Undertaker.Featuring forewords by Edge and JBL, who famously nailed Gas in the head with a steel chair, readers will get an inside look into not only the training and sacrifice these athletes go through, but the behind-the-scenes workings of a day in the WWE.