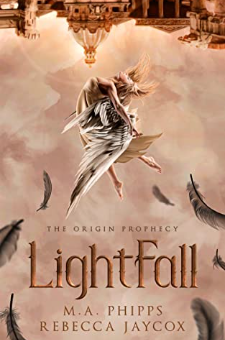 A forbidden friendship. A dangerous secret. What's done in the dark always comes to light.After a number of violent incidents brand seventeen-year-old LUNA as a danger to others, she’s committed to a psychiatric hospital, reaffirming what she’s always known—she’s crazy. Only one person disagrees with her diagnosis: the new doctor with the bewildering golden glow who insists she’s “special” and doesn’t belong there. When he arranges to have her transferred to a school in Egypt for children with angelic blood, Luna is forced to question if she’s actually insane or if there’s possibly more to her troubled past than she thought.

CALEB is a Dark Nephilim student at the Tower of Babel Academy in Iraq. Despite being the third generation of his bloodline, he’s more gifted than many of his peers, making him the perfect candidate to go undercover as an exchange student at the school for Light Nephilim in Alexandria. Once there, he has only one mission: find a way to free his grandfather, Alexander the Great, who was entombed after trying to conquer the world.

When Luna and Caleb cross paths, their outcast natures draw them to each other despite everyone around them saying Lights and Darks can’t be friends. With millennia of prejudice working against them, can they overcome the divide built to keep them apart? Or will the building trail of secrets and lies they discover destroy their fragile, new-found bond?LIGHTFALL is the first book in the YA paranormal romance trilogy The Origin Prophecy, a loose Romeo + Juliet retelling about two teenage Nephilim caught on opposing sides of an ancient feud. This novel features a slow burn, enemies-to-lovers, forbidden romance and ends on a cliffhanger.