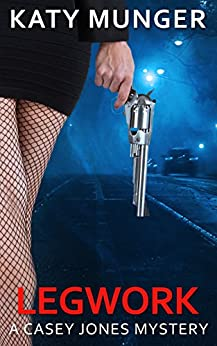 “Casey Jones joins the ranks of smart and gutsy heroines. The South will never be the same. Don't miss her." --Janet Evanovich‘WE ENDED LUNCH CRABBIER THAN THE CAKES…’ So notes wisecracking detective Casey Jones, and you know right away you’re in good hands. Casey’s as beautiful, badass, big, and big-hearted a private eye as ever wrestled a perp to the ground. And don’t think she can't-- she mentions her 170 pounds of pulchritude every chance she gets and shows it off to expert advantage in numerous encounters both personal and professional.First the professional—need we mention she’s tough as a Florida gator? Pick a fight with her at your peril. Next the personal. She’s the old-fashioned kind of private eye who can love with the best of them, but when it comes to lust she’s in a class by herself. Fortunately for the reader, she’s downright hilarious on the subject. (As well as almost all others.)As the title itself attests, Katy Munger’s Casey is the direct descendant of Archie Goodwin, Rex Stout’s famous leg man, whom mystery fans will remember as perhaps the most accomplished wisecracker in all of detective fiction—until this doll came along, that is!Though Casey’s riotous narration makes the whole series a laugh-a-minute to read, Munger herself usually has something deadly serious up her sleeve.LEGWORK’s about crooked politicians, crooked business deals, old grudges, ancient crimes, and everyone’s favorite, dysfunctional families. Set in the Raleigh area, it sports an Old South patina of patrician families gone rogue and murder behind the antebellum columns, all deriving from one of Casey’s “babysitting” jobs, this one for a politician with a corpse in her car. (Casey babysits--read “bodyguards”--because, due to a tiny prison sentence once upon a very bad husband, she doesn't actually have a private investigator license.)But she’s got a PI to work for and wouldn't you know, he’s Munger’s wicked idea of who Nero Wolfe would be if he were a slob instead of a portly epicure. Both weigh a sixth of a ton, but instead of Chef Fritz’s fine repasts, Bobby D. dines on Little Debbie snack cakes, Hostess treats, and especially Krispy Kreme doughnuts, his favorite and Casey’s-- which you are guaranteed to crave by the time you get to “The End”.LEGWORK (and the rest of this fine series) will appeal to fans of all female sleuth mysteries—private eyes like Sue Grafton’s Kinsey Millhone, Sara Paretsky’s V.I. Warshawski, Laura Lippman’s Tess Monaghan, Marcia Muller’s Sharon McCone, and Janet Evanovich’s Stephanie Plum.But let's not forget their tough and witty male antecedents—if you ever flipped over Philip Marlowe, Spenser, or of course, the immortal Wolfe and his buddy Archie, you’ll fall in love with their kid, Casey.