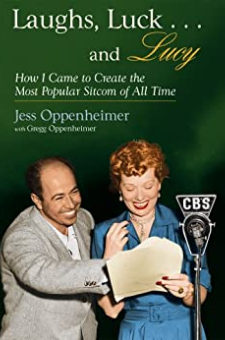 Jess Oppenheimer, the man Lucille Ball called the "brains" of "I Love Lucy", gives us a rare first-hand look at television history as it was being made. A rich entertainment resource, "Laughs, Luck…and Lucy" features a hilarious memoir, and scores of rare photos, three never-before-published scripts (including the only "I Love Lucy" script that Lucy or Desi ever refused to perform), plus links to web-based audio of Lucy's classic radio comedy performances, unheard for more than 40 years! Oppenheimer's book, written with his son, Gregg, is not only a reliable record of how "I Love Lucy" was conceived an executed, but also a humorous insider's account of the broadcasting industry's development from the wild early days of radio to television's "golden age."The 2nd Kindle Edition (2012) now contains the full script of Gregg Oppenheimer's humorous play, "I Love Lucy: The Untold Story", broadcast nationwide on SiriusXM Radio on Lucille Ball's 100th birthday in 2011.All royalties from this edition benefit the Elizabeth Glaser Pediatric AIDS Foundation.