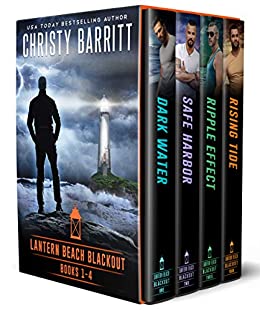 All four books in the Lantern Beach Blackout series are now available in one set!Dark WaterA FORMER NAVY SEAL HAUNTED BY HIS PASTColton Locke can’t forget the black op that went terribly wrong. Desperate for a new start, he moves to Lantern Beach, North Carolina, and forms Blackout, a private security firm. Despite his hero status, he can’t erase the mistakes he’s made. A WIDOW WITH SECRETSFor the past year, Elise Oliver hasn’t been able to shake the feeling that there’s more to her husband’s death than she was told. When she finds a hidden box of his personal possessions, more questions—and suspicions—arise. The only person she trusts to help her is her husband’s best friend, Colton Locke. THE FIGHT FOR JUSTICESomeone wants Elise dead. Is it because she knows too much? Or is it to keep her from finding the truth? The Blackout team must uncover dark secrets hiding beneath seemingly still waters. But those very secrets might just tear the team apart.
Safe HarborA JOB AS EASY AS SUNDAY MORNINGGuilt over past mistakes haunts former Navy SEAL Dez Rodriguez. When he’s asked to guard a pop star during a music festival on Lantern Beach, he’s all set for what he hopes is a breezy assignment.UNTIL HE MEETS BREE JORDANBree hasn’t found fame to be nearly as fulfilling as she dreamed. Instead, she’s more like a carefully crafted character living out a pre-scripted story. When a stalker’s threats become deadly, her life—and career—are turned upside down.DANGER RISES UP THE CHARTSFrom the start, Bree sees her temporary bodyguard as a player, and Dez sees Bree as a spoiled rich girl. But when they’re thrown together in a fight for survival, both must learn to trust. Can Dez protect Bree—and his carefully guarded heart? Or will their safe harbor ultimately become their death trap?
Ripple EffectA CHOICE THAT HAUNTS HIMGriff McIntyre never expected his ex-wife and three-year-old daughter to come to Lantern Beach. After an abduction attempt, they’re desperate for safety. Now Griff’s not letting either of them out of his sight.A DESPERATION THAT BINDS THEM Bethany knows Griff is the only one who can protect them, despite the fact that he broke her heart. But she’ll do anything to keep her daughter safe—even if it means playing nicely with a man she can’t stand. A DANGER THAT PULLS THEM APARTAs peril ripples through their lives, Griff and Bethany must work together to protect their daughter. But an unseen enemy wants something from them . . . and will stop at nothing to get it. When disaster strikes, can Griff keep his family safe? Or will past mistakes bring the ultimate failure?
Rising TideA FORMER SEAL UNDER SCRUTINYBenjamin James knows there’s a traitor within his former command. The rest of his team might even think it’s him. As danger closes in, he must clear himself and stop a deadly plot by a dangerous terrorist group.A WOMAN CAUGHT IN THE CROSSFIREAll CJ Compton wanted was a new start after her career ended under suspicion. Working as the house manager for private security group Blackout seems perfect. But there’s more trouble here than what she left behind.A BATTLE TO THE ENDAs the tide rushes in, the stakes continue to rise. If the Blackout team fails, it’s not just Lantern Beach at stake—it’s the whole country. Can Benjamin and CJ overcome their differences and work together to find the truth?The Lantern Beach Blackout series features clean, pulse-pounding romantic suspense with Navy SEALS on the secluded island of Lantern Beach.