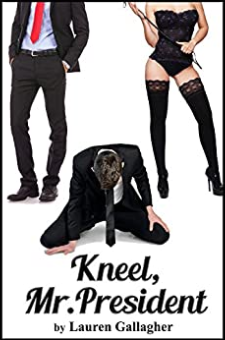 An ex-SEAL in a wetsuit, a bisexual President, and a First Lady with a tattoo on her ass… Secret Service agent Kent Sinclair, head of POTUS security, thought he was prepared for anything. Then, the First Lady—a woman who barely tolerates his presence—approaches him with a request that startles the hell out of him.Carlene Broderick is scared. Her husband James is buckling under the strain of the highest office in the land. With the weight of the country and an impending war on his shoulders, he’s a heart attack waiting to happen. Carlene is out of options, so she resorts to the man whose name James calls out in his sleep—a buddy from his SEAL days. His ex-lover. Kent.There’s nothing Kent won’t do for his best friend, but he quickly realizes it’s not him that James needs—the Commander in Chief is desperate to give up complete control in the bedroom. And if she’s willing, Kent can teach Carlene to be what her husband needs.Now James is caught deep in forbidden territory—torn between his beloved wife and the man he’s never stopped loving.This 95,000 word novel was previously published.