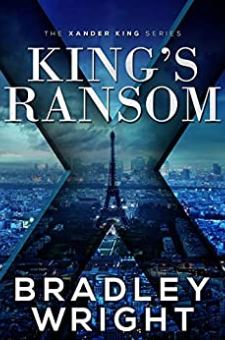 Natalie Rockwell has been taken. The President's daughter has been targeted. A bomb is about to explode. The clock is ticking..._____________________________" As soon as you start this book, and every other book, you are immediately engulfed in nonstop action and suspense!"- Kyle Corum_____________________________ After Vanquishing his enemies in Moscow, former Special Ops legend, Xander King returned home, finally feeling free of his violent existence. But the next morning when he is greeted by a blood-soaked tragedy, and the shocking message that the woman he loves has been taken, his vengeful past pulls him right back in. Armed with only a cryptic text message from an unknown source, Xander goes on the hunt for revenge in Paris. It's a race against the clock to save Natalie, and the ransom is Xander's life for hers. A price he's more than willing to pay. But when his team learns that the ruthless terrorist responsible for the chaos has a far more sinister plan, they must immediately shift gears to stop a threat that would not only affect the citizens of France, but the President of the United States himself. One highly skilled team. Two insidious acts to stop. Thousands of lives at stake. The hunt is on. The series has a combined 1000+ five star reviews, with readers raving about their new favorite action hero and his vigilante team. They love this different twist on their favorite action-thriller genre, calling the series: "shocking", "refreshing", "heart-pounding fun!". And saying this about Xander: "he's a hero with swagger", "I love his willingness to do anything for his team", "Xander and Sam are action-thriller gold!""._____________________________Dear Reader,If you enjoy Brad Thor, Vince Flynn, Daniel Silva, David Baldacci, Lee Child, Tom Clancy, Stuart Woods, Nelson DeMille, Ken Follett, James Patterson, L.T. Ryan, or Clive Cussler, my fans believe you'll have a blast reading my books as well.I realize that life can be expensive, the kids/grandkids need to eat, the lights need to stay on, and the car doesn't run on hopes and dreams. I understand, because the same goes for me. And while I can't help you with those expenses, I can offer you hours of exciting escape for the price of your morning coffee.Thank you for your consideration,Bradley