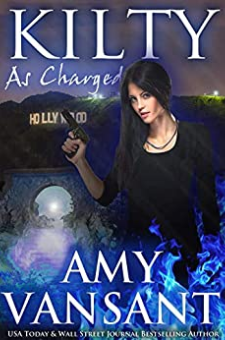 A mystery, comedy, thriller and urban fantasy all-in-one from USA Today and Wall Street Journal best-selling author Amy Vansant.When Catriona spots a plaid posterior passed out on the Hollywood movie lot where she works, she doesn't know her life as a fixer for Hollywood's spoiled elite is about to grow more complicated.She wants to write-off the ridiculously sexy, kilt-wearing Brochan as a con artist, but her adoptive father seems strangely comfortable with a man claiming to have no memory of his past or knowledge of the modern world.A red-bearded thug, an old picture and a three hundred year-old vendetta soon have Catriona worried she could lose everything - including her mysterious time traveling Scotsman.A Highlander followed her home...Can she keep him?Fans of Janet Evanovich, Colleen Helme and Denise Grover Swank will delight to find a new series that deals both thrills and laughs at a rapid-fire pace.Finished reading Kilty as Charged yesterday and loved it!  Amy's combination of humor, action, just enough romance, and humor really hit me perfectly --- and made me laugh out loud.Repeatedly.  Added to which, she wrote a charming, hilarious male maincharacter. I very much enjoyed her writing style and sense of how toemploy the deft lampoon. It is now imperative that I read the otherbooks in the series.  --- Marcus Cootsona, Author of the Severin Force Political Thrillers * There is a partial cliff-hanger (not a full-cliff hanger as some reviews might imply!)- each book can stand alone and is also part of a larger story arc that continues through the series. The Kilty series are full novels, NOT short stories or novellas.