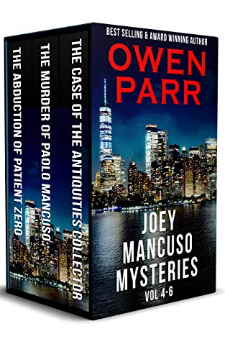 BOOK 4 -THEIR DAUGHTER GOES MISSING AND THEY DON'T CALL THE COPS? THAT’S ONE OF MANY……intriguing mysteries deliciously and intricately layered in these pages. Layer upon layer, twist upon twist, secret upon secret, this is a case tailor-made for a Sherlock Holmes devotee like private investigator Joey Mancuso. From the beginning, there’s just something funny about parents who didn’t report a missing student right away, and days later still want no police.

Hold it here! This is their beloved daughter, last seen leaving for a date. Why wouldn’t they want as much firepower as they can get?  Because they know too much, that’s why—and Owen Parr’s clever detective senses that. Joey’s first job’s to save the girl, but no way he’s going to stop there. The scrappy PI and ex-cop’s going to get answers if it kills him.

A lot of the fun is in the clever Russian doll structure of a puzzle wrapped in a mystery, each discovery leading to a bigger and more surprising twist, but it wouldn't be half as delightful without the loveable series ensemble author Parr has assembled. The usual suspects are here—Marcy, Joey’s  new wife and favorite FBI agent; researcher Agnes, who goes to Father Dom’s Mass every morning, presumably to repent for her shameless hacking; and Mr. Pat, gentle giant bartender-turned-detective. There’s also a welcome new addition—a professor who’s as close as you’re ever going to get to Indiana Jones.

BOOK 5 -AT 16, HE SAW HIS DAD GUNNED DOWN. NOW HE HAS A CHANCE TO FIND THE KILLER,,,PI Joey Mancuso was just a kid when he watched a stranger walk into a Little Italy bar, shoot his mobster dad in the chest, and calmly walk back out, disappearing into the Manhattan din. The murder was never solved. And the old mob adage “an eye for an eye” went unfulfilled.

Perhaps retired partner Alexander Wetherly has answers. Next stop: Hilton Head, where Wetherly is happily ensconced with a houseful of help serving up bottomless Arnold Palmers. But a peaceful Q&A on quaint Daufuskie Island turns murderous when the elderly gentleman who runs Joey’s B&B winds up stabbed to death. And this isn’t the first murder of its kind—it seems Daufuskie Island has a grisly and deeply-seated cold case all its own.

With the help of his  cohorts—including Father Dom and a talented hacker (their researcher, Agnes)--  Joey meticulously puts together the pieces of two puzzles at once—and scrutinizes the connections between them—hoping to solve his father’s murder while preventing another from haunting the Carolina shores.

BOOK 6 -THE WOMAN WHO KNEW TOO MUCH. As the men around her are dropping like fliesIn his sixth labyrinthine hard-boiled puzzler, NYC private eye Joey Mancuso finds himself neck-deep in a maze of a murder mystery—the kind that weaves through military secrets and international espionage—at the center of which is the woman he loves. The vic, Oscar Stanton (name etched into his designer trousers), was gunned down in Washington Square Park in broad daylight, just after a lunchtime rendezvous with a business associate. A quick and dirty ID reveals the real Oscar Stanton was working in cybersecurities for the DOD—and, perhaps unsurprisingly, was KIA in Afghanistan. And since Mancuso’s antics tend to weave a winding yarn as intricately-connected as a satisfying Sherlock Holmes.