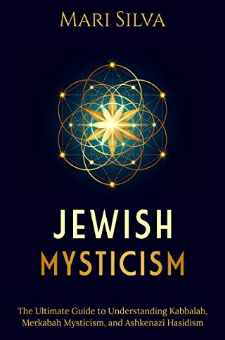 If you want to explore Jewish Mysticism, then keep reading…

Jewish Mysticism is a powerful expression within the Jewish tradition. Rooted in antiquity and veiled in mystery until quite recently, Jewish Mysticism has burst into the modern world in guises both illuminating and bewildering.Throughout Jewish history, flashes of the light held within sacred texts have sparked the sages' inquisitive minds throughout the Diaspora. Rising out of the ashes of the Temples once standing in Jerusalem, the texts and theologies associated with Jewish Mysticism have comforted and ecstatically raise those who have used their knowledge.

In this book, we'll review key texts, including:

But in examining these texts, we'll also delve into the historical contexts in which they were written and how they served as spiritual responses to the tribulations of the Jewish people, interpreted by those who wrote and disseminated them.

You'll meet some great sages, chief among them the Father of Lurianic Kabbalah, Isaac Luria, his disciple Moses de Leon, and the great Moses Cordovero, who recognized the need for Messianic hope in the face of oppression.You'll meet the sefirot and be introduced to their mysteries as the emanations of the Divine. You'll learn about key Kabbalistic concepts like tzimtzum, shevirah, and tikkun and what they mean, as a foundation for understanding the operation of the sefirot, set in Etz Chaim (the Tree of Life).You'll see how spiritually powerful texts can be abused through popularization. This always concerned the Kabbalistic sages and is the reason for the traditionally limited transmission of Kabbalah.You’ll learn how the Ashkenazi Hassidim came to be the powerful manifestation of Judaism they are today and how they went from being the "bad boys" of Judaism to part of the ultra-Orthodox Haredi movement. You'll meet the Baal Shem Tov, father of the Hassidic renaissance, and the Vilna Gaon, leader of the Mitnagdim, once at war with each other but the originators of a new iteration of Hassidic life and practice, in response to the Haskalah (Jewish Enlightenment).

This book provides a detailed introduction to the fascinating world of Jewish Mysticism and the community most closely associated with it. Bring your curiosity and questions and open the door to the mysteries of this vibrant corner of the Jewish World.

Click the “add to cart” button and step into the fascinating world of Jewish Mysticism.