It Rained Red Upon The Arena 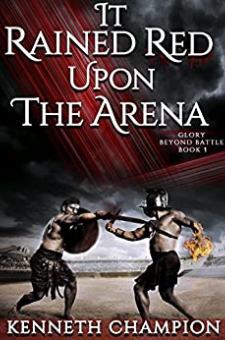 Seventeen year old Nick Bint has had his life planned out since he was a young boy. When he would turn eighteen, he would become a Refect - a sworn soldier of the crown meant to protect the citizens in the Kingdom Of Hentrio. But on one fateful night, Nick finds himself with a bloody dagger clenched in his right hand. He had no choice…he had to defend his family’s honor.In Hentrio, being found guilty for murder means you must serve two years in the city arena. Everyone fears a sentence in the arena because only the strongest of warriors makes it past six months – it’s essentially a death sentence the crowds of the arena see as a sport. Being in the arena with another race whom are capable of casting destructive magic and those of his like who are beyond years of swordsmanship training - how can young Nick be able to survive?Meanwhile, Hentrio has a shadow being cast over it by a dark power. The king would look to anyone for help. The arena is only the beginning.The epic “Glory Beyond Battle,” trilogy begins with this debut novel from author Kenneth Champion.