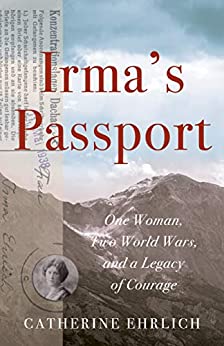 In this gripping family tale, Catherine Ehrlich explores her Austrian
grandparents’ influential lives at the crossroads of German and Jewish
national movements. Weaving her grandmother Irma’s spellbinding memoirs
into her narrative, she profiles a charismatic woman who confronts
history with courage and rebuilds lives—for herself and Europe’s
dispossessed.
Starting out in Bohemia’s picturesque countryside, Irma studies
languages in Prague alongside Kafka and Einstein—and so joins Europe’s
intelligentsia. Tension builds as World War I destroys that world, and
Irma marries prominent Zionist, Jakob Ehrlich, bold advocate for
Vienna’s 180,000 Jews. Irma’s direct words detail the weeks after
Hitler’s arrival when Adolf Eichmann himself appears to liberate Irma
and her son from Vienna.
Irma’s stunning turnaround in London unfolds amidst a dazzling cohort of
luminaries—Chaim and Vera Weizmann, and Viscountess Beatrice Samuel
among them. Irma finds her voice as an activist, saving lives and
resettling refugees, and ultimately moves on to New York where her work
resumes among high-profile friends like Catskills hostess Jennie
Grossinger.
Along the way, Ehrlich queries her family’s fate: what was behind
Eichmann's twisted role in her grandparents’ lives? How was Irma able to
focus outwardly when her own life was in crisis? Part intimate memoir,
part historical thriller, Irma’s Passport is an inspiring true story about remarkable women whose unsung courage restored the world we know.
This is a book for fans of Edmund de Waal, Erik Larson, and Alexander Wolff.