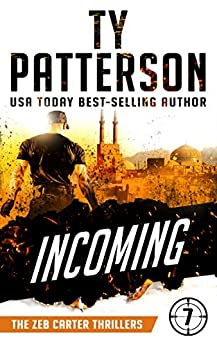 Old enemies don't die. They become more wily.When faced with an audacious attack on America, Zeb Carter does the unthinkable.He offers himself as bait. Zeb Carter had stopped the greatest terrorist act against his country.However the ring leader behind its attack, a deadly intelligence chief, was still out there.That enemy has an audacious plan to ruin the US and destroy the world order. Zeb Carter and his team are determined to stop him. However they'll have to offer themselves as bait.In a hostile country and in a city that has been turned into a giant prison just for them.????? 'An OMG, Freaking-Fantastic, Unputdownable, Unmissable, Unforgettable, Running-Out-Of-Superlatives, One-Click Thriller'????? 'Hands down, the best thriller of the year'?????'Dazzling! Ty Patterson gets better with each thriller he writes'?????'A stop-the-clock, call-in-sick thriller reminiscent of the best of Gregg Hurwitz, Vince Flynn and Brad Thor'