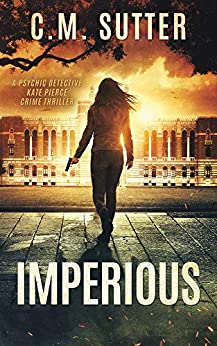 Two female students at a community college have died during finals week, and the college and the city of North Bend want answers. With no witnesses to the crime and no obvious signs of foul play, these disturbing occurrences may be nothing more than unusual coincidences. The sheriff’s office and medical examiner have their hands full as they try to find logical explanations for the deaths.
Detective Kate Pierce begins to show signs of physical distress whenever she’s near the bodies, and further research leads her to believe she could be experiencing psychic transference—she’s feeling the same symptoms these students did when they took their last breaths.
Kate is determined to be heard, and when the shocking results of the toxicology reports are revealed, she and her colleagues know they’re headed down the right path. There can be only one answer and only one person involved—they just have to prove it.
When another student goes missing and is soon found dead, the case breaks wide open, and the final showdown between Kate and the suspect puts her transference theory to the ultimate test.

* All books are standalone stories but since characters carry over, they are best read in chronological order.

Start at the beginning of the Monroe Sisters' world with Maniacal. Find all of the books leading up to the Kate Pierce Crime Thriller Series listed in order below.

Note: The Jade Monroe FBI Thriller books follow on the heels of the conclusion of Exposed, Book 5, in the Detective Jade Monroe Crime Thriller Series.

Note: The Amber Monroe Crime Thriller books follow on the heels of the conclusion of Malice, Book 5, in the Agent Jade Monroe FBI Thriller Series.

Editorial Review:
“In the second installment of Sutter’s smart new crime thriller series, Psychic Detective Kate Pierce finds herself on the team investigating how two young college students ended up dying under mysterious circumstances during finals week. While Kate has used her intuition to help solve cases before, this time her body starts experiencing odd physical symptoms when she’s in the presence of the victims’ bodies. After realizing that her symptoms are directly related to the manner in which the victims died, Kate tosses out a wild theory that proves to be correct—and puts her and her colleagues in the killer’s crosshairs. A terrific thriller with a thoroughly unexpected conclusion.” Angela M., Line Editor, Red Adept Editing