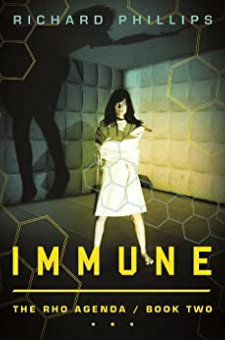 In the final pages of the spellbinding novel The Second Ship, NSA director Jonathan Riles failed to halt the Rho Project’s infiltration of the US government. Now the Project’s alien nano-serum is loosed upon the world, disguised as a miracle cure and leaving too many people—good people—dead. And anyone still alive to challenge the Project won’t be for long: an assassin known only as El Chupacabra is systematically eliminating any and all opposition.At the top of the hit list is NSA fixer Jack Gregory, along with Heather McFarland and Mark and Jennifer Smythe, the three teenagers who first exposed the Rho Project’s evil agenda. In just a few short months, the trio has seen life as they know it stripped away, trapping them in a confusing new reality where human DNA is modified at an alarming rate. Struggling to understand what they are becoming and on the run for their lives, the teens and their remaining allies must stop the Rho Project before it alters the very fabric of humanity.