If She Were Blind 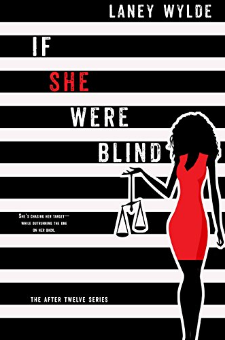 Laney Wylde was named a winning author in the 2018 Southern California Book Festival for Best General Fiction Novel of the Year.When the courtroom fails, lawyer Estlyn Collins delivers justice outside the legal system. She refuses to rely on others— but when a sinister figure from her past comes back to haunt her, she’ll have to put her trust in someone new… A smart, sexy read!Not everyone can get justice the traditional way—that’s where Estlyn Collins comes in. A young lawyer in Santa Monica, her "legal" service, After Twelve, works outside the courtroom to tip the scales when the justice system has failed.For a price.Thanks to her powerful underground network, Estlyn's success rate is stellar, and her inbox stays filled with inquires from the desperate and vengeful. But when one of those names is a ghost from her past seeking vengeance against her, she’s shaken to her core. Off balance and scared to be alone, she makes an impulsive move for a guy. He’s a complication she doesn’t have time for, but it turns out he may also be an unlikely—if unwitting—asset.Treading the rapidly thinning line between personal and professional, Estlyn pursues her target while outrunning the one on her own back—only to find she may be running into a lot more than she bargained for.If She Were Blind is the first book in the engaging New Adult series After Twelve by author Laney Wylde. Perfect for fans of television shows like Revenge, Scandal, and Veronica Mars, the After Twelve Series is a gritty social-issue drama that delivers steamy romance, intrigue, and the most bittersweet revenge plots. Estlyn's determination to right every wrong is sure to quench your thirst for justice, yet leave you wanting more.If She Were Blind is an award finalist for the 2018 Romance Writers of America Contest“Laney Wylde may just be a magician with her ability to conjure the perfect scenarios and the ways out that no one else can see.” —My Blissful Books Blog"With plenty of believable drama, laugh out loud moments, and sexy situations and characters, If She Were Blind is well worthy of five out of five stars and my anxious hands long for its sequel." ~Emily Shore - Author of The Aviary"If She Were Blind is a genre defying page turner. If She Were Blind feels like a suspense, mystery, and romance novel all mashed up into one." ~Amazon Reviewer"If She Were Blind is the first in the new After Twelve series by author Laney Wylde, and it begs the question, what do you do when justice fails you, especially after what could be the worst moment of your life. The answer - if you can manage it, you hire After Twelve and let Estlyn issue her own brand of well-deserved justice." ~Melanie’s Muses"I am so addicted to these characters. Estlyn is strong and totally a badass. And Cal is swoon worthy. I fell for him right away." ~Rabid Readers Book BlogAlso, check out Laney Wylde’s new stand alone contemporary drama Never Touched: Sawyer is a survivor—gritty, determined. But the struggle to put it all behind her is something that's with her every second of the day. Her abuser is in jail now, but he'll never truly let her go. When she tries to shelter in something good, the darkness inevitably follows. The effects of the abuse flow through her life in this coming of age drama about finding the courage to keep fighting.