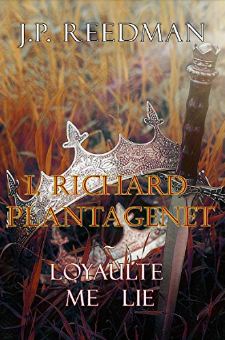 I RICHARD PLANTAGENET: PART TWOLOYAULTE ME LIESequel to Tante le Desiree but also a stand-alone book in its own right.1483. King Edward IV is dead. The Woodvilles have the Great Seal—and the treasury.In the north Richard Duke of Gloucester receives word of his brother’s unexpected death from Lord Hastings, who advises him to get to London and take possession of the new young King.Riding into Northampton, Anthony Woodville, guardian of Edward V, is implicated in a plot to ambush Richard upon the road. He is arrested and Edward V taken into care by Gloucester and the flamboyant and persuasive Duke of Buckingham.Once they reach London, Buckingham glibly suggests that the young King be sent to the Tower of London ‘for his own safety.’ Plans for the Coronation progress as expected—and then Bishop Stillington comes to Richard with a shocking revelation.What the Bishop imparts will set the Wheel of Fortune spinning, dooming a young boy and setting Richard of Gloucester on the road to Kingship…and tragedy at Bosworth Field.Called a ‘new Ricardian classic’, I, RICHARD PLANTAGENET is both bloody and bawdy; the story of Richard III retold in first person for the first time in a full length novel, from Richard’s point of view. Tragedy and comedy collide. A different Richard than any you have read before— warrior, scoliosis sufferer, loving father, loyal husband, and unexpected King —with a sense of humour!