How the Mistakes Were Made 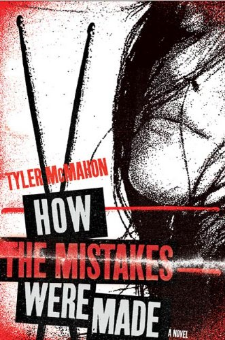 Laura Loss came of age in the hardcore punk scene of the early 1980s. The jailbait bass player in her brother Anthony’s band, she grew up traveling the country, playing her heart out in a tight network of show venues to crowds soaked in blood and sweat. The band became notorious, the stars of a shadow music industry. But when Laura was 18, it all fell apart. Anthony’s own fans destroyed him, something which Laura never forgot. Ten years later, Laura finds her true fame with the formation of The Mistakes, a gifted rock band that bursts out of ‘90s Seattle to god-like celebrity. When she discovered Nathan and Sean, the two flannel-clad misfits who, along with her, composed the band, she instantly understood that Sean’s synesthesia—a blending of the senses that allows him to “see” the music— infused his playing with an edge that would take them to the top. And it did. But it, along with his love for Laura, would also be their downfall. At the moment of their greatest fame, the volatile bonds between the three explode in a mushroom cloud of betrayal, deceit, and untimely endings. The world blames Laura for destroying its rock heroes. Hated by the fans she’s spent her life serving, she finally tells her side of the story, the “true” story, of the rise and fall of The Mistakes.

"A rock novel good enough to wish you had an accompanying soundtrack." -Kirkus Reviews

"...McMahon conveys the exhilaration and vitality of an outsiders' music scene and successfully evokes a time and place where kids who followed their own guitar-powered soundtracks were briefly able to crank up the volume for the world to hear."  -Publisher's Weekly

"I loved this book — the pace builds quickly as you turn the pages faster and faster to discover imminent train wrecks, cleverly foreshadowed. Dueling settings of the early 80's hardcore era and the early 90's grunge era are set back to back ending in a scandalously destructive grand finale. Secrets are revealed one by one, cautiously, like a well-played hand of poker. This was one wild ride: a well-researched tale of sex, drugs, rock-and-roll and possible redemption."  -Sean Yseult of White Zombie

"Through its vivid rendering of both eighties hardcore and nineties grunge, this novel reveals the music world as a site of redemption and destruction. Through its brilliant portrayal of flawed heroine Laura Loss, it depicts the human heart as a source of weakness and strength. The first makes this a great rock-and-roll novel. The second makes it a great novel."  -Elise Blackwell, author of Hunger and An Unfinished Score

"...a novel that captures the gorgeous, messy, heartbreaking history of the indie rock revolution like lightning in a jar. And like any great pop song, it's a story that soars from hook to killer hook, never letting you go."  -Alina Simone, author of You Must Go and Win

"With the velocity and conviction and frenetic pace of a punk anthem, McMahon has captured perfectly the life cycle of a rock and roll band in all its exhilarating and destructive glory. How the Mistakes Were Made is fast, furious, and un-put-downable."  -Jonathan Evison, author of West of Here and All about Lulu

"Truly wonderful, incredibly rich and exciting, and a tremendous slice of neon and spit and sensuality and dank, beautiful longing for the nearly-forgotten burn of punk."  -J. Reuben Appelman, author of Make Loneliness and Hollywood Blood