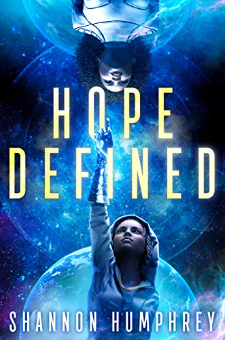 An outcast. An ancient interstellar bloodline. A supernatural connection. Hope Casey is a fifteen year-old outcast, a wannabe astrophysicist who creates her inventions at night and hides in the school library by day. Until the young ingenue meets the extraterrestrial version of herself. A goddess on the other side of space, who controls the stars. More than a dream, Hope's supernatural alter ego gives her growing power. But with new skills, Hope forms enemies. Seeking to destroy Hope, her rivals concoct a vicious scheme, Operation Solve Hopeless Case. Their goal: to stop Hope from claiming the school's highest honor. Let the epic take-down wars begin. But what starts as Hope's fight to survive school, unravels into a long, epic war between space and Earth.  In the alternate other universe exists a supernatural race of beings, the ancestors of humankind. Half-star, half-human, the Scions abandoned Earth long ago. But there is one Scion named Dinah, who feels Hope's torment. And Dinah cannot forget Hope, the last Scion on Earth.Enjoy this science fiction coming of age saga in which Harry Potter meets Mean Girls.