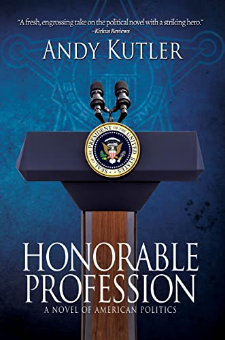 He's a former Secret Service agent. She's his college-aged idealistic, yet neglected daughter. Hoping to make amends and rebuild their relationship, he gets pulled into her professor's presidential campaign. Bonded in a way he never imagined, the pair is forced to navigate the treacherous waters of American politics together.

Honorable Profession: A Novel of American Politics is a compelling, hopeful story of a cynical former Secret Service agent and his idealistic daughter as they follow a longshot candidate into the perilous arena of presidential politics.

After resigning from his agency under an ethical cloud, 46-year-old Dan Cahill commits himself to rebuilding his relationship with Megan, the college-aged daughter in Las Vegas he has long neglected. She persuades a reluctant Cahill to join the student-led campaign of a popular professor competing in the Nevada presidential primary against impossible odds. As they face powerful forces conspiring to clear the field, Cahill's deep-seated disdain for electoral politics collides with Megan's higher ideals. Each of their faiths are tested by political allies and adversaries, all desperate for victory, no matter the costs.

Crafted by award-winning author Andy Kutler, Honorable Profession is an absorbing, modern-day political drama filled with authentic and indelible characters, each struggling with their own loyalties and principles as they duel with unscrupulous rivals and the meaning of public service.