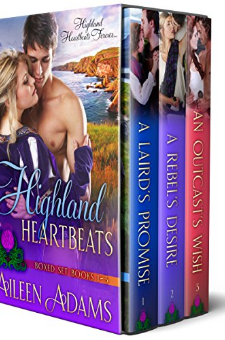 Three full-length Highland romances from author Aileen Adam’s Highland Heartbeats series. Book One of the Highland Heartbeats Series! A Laird’s Promise Some promises are hard to keep…Phillip promised he’d let her go home. He promised, after she completed her task, she’d be free. He didn’t promise her that he wouldn’t capture her heart before he released her.For Sarah, captive of the Highland Laird, that these promises are kept is paramount. Phillip never expected to fall in love with the woman who was supposed to save his brother’s life. He also never expected to break a promise. But some promises are hard to keep, especially when he finds out the secrets she’s keeping.* * *Book Two of the Highland Heartbeats Series! A Rebel’’s Desire Some secrets are hard to keep…Jake Duncan promised Heather MacDonald he’d keep her secret. He’d help her train to be a warrior and all she had to do was give him a kiss. He didn’t promise that she wouldn’t feel the stirrings of desire for this former soldier. For Heather, a woman determined to become a warrior, Jake’s promise means the difference between life and death. Wounded at war, then the target of a malicious healer, Jake Duncan, brother of the Highland Laird, has decided he has to prove himself, over and over again. He never thought that part of his journey would involve falling for the woman from the Lowlands who wasn’t as demure or as shy as he originally thought, especially not when she was wielding a dirk. * * *Book Three of the Highland Heartbeats Series! An Outcast’s Wish Some memories are best left forgotten…Maccay Douglas finds a trespasser on Duncan lands. Except the trespasser isn’t some lad up to mischief. It’s a woman in boy’s clothing. A woman with a bruise on her head and no name, and hunting skills. She claims she doesn’t know who she is. That doesn’t stop him from falling in love. Except this red-haired beauty has an explosive secret that is bound to bring war to the Highlands.