Hero in a Halfling 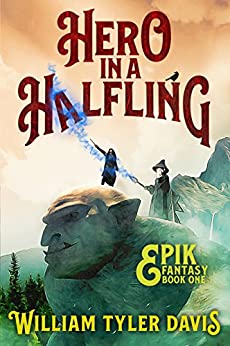 The Hobbit meets Robin Hood: Men in Tights in this “slight” parody.

In search of a father he's never known and of magic he's sure he’ll exhibit (once the timing is right), the young halfling moves to his local kingdom. There, Epik becomes the apprentice to the first wizard he meets – the only wizard left in the city. And for the first time in his life, the halfling makes friends, most notably with a beautiful half-elf girl named Myra.

As a secret sect meet to plot the king's demise, a family of mountain trolls threatens the city. And Epik sees the opportunity to do something, well, epic.

He must learn magic.
He must save the girl.
And he must protect the kingdom . . . Before it falls into the wrong hands.

Spot the pop culture references, uncover the realm’s mysteries, and chuckle your way through this light-hearted fantasy adventure.

Hero in a Halfling is the first in the Epik Fantasy Series. Perfect for fans of both Discworld and Middle-earth. Snag your copy today on Kindle, audio, or print!