HELP! I Married an Alien a Comedian 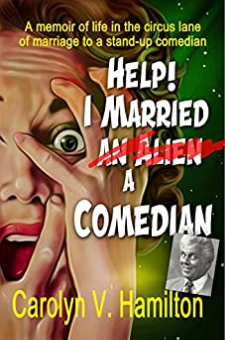 There’s a fine line between comedy and cruelty, and this intimate and quirky memoir invites readers into Carolyn V. Hamilton’s tumultuous world of marriage to stand-up comedian, Cork Proctor, a Las Vegas comedy legend.Every relationship contains a his version and her version of events, and Carolyn is clear that this is her version of her life and marriage. In this powerful memoir, she chronicles her experiences of love and world travel with her husband, balancing her career as a graphic designer and print communication professional with his comedy career. In these vignette stories of their relationship, she reveals with honesty and wit the early years after they met at the Las Vegas Press Club, their courtship and consummation, their fund-raising wedding, their adventure in the U.S. Peace Corps, how the marriage ended, and their continued relationship after divorce, including his 80th birthday Las Vegas roast, and their move to Ecuador. At the same time, she reveals her emotional triumphs and sorrows, both public and private, as she lived them.HELP! I Married an Alien a Comedian, includes a foreword by award-winning Las Vegas journalist and historian, John L. Smith “Hysterically funny and touchingly human, I was fascinated at their adventures and relationship.” Joeann Fossland“Love Carolyn's way of putting things into context!” Gary S. Hansen“One talented alpha Male + One talented alpha Female = one roller coaster ride of epic proportions” – Fred “Mickey” FinnBe sure to check out amazon’s “LOOK INSIDE” feature (click on the book cover image) to see a list of story titles that will introduce you to the flavor of this memoir.