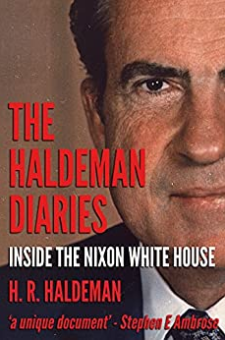 “Because history is more art than science, it is remembered now only as it was chronicled then; this unfortunately is not always as it actually happened.”Following his election as the 37th President of the United States in November 1968, Richard Nixon chose H. R. “Bob” Haldeman to be his Chief of Staff.After the announcement, Haldeman was encouraged by a close friend, and presidential scholar, to faithfully record each day’s events, and his thoughts regarding them.Deeming it worth the commitment, the result of his endeavour is nothing short of extraordinary.Alongside power struggles and tragedies are recorded triumphs and hope, from the inroads made with China and Russia to the Vietnam peace talks.But it is Watergate that traditionally defines the era, and as the 1972 election passed with Nixon’s re-election the entries show how its hold on the political arena became unshakeable.Although we know the story’s end, Haldeman’s reveal of how events unfolded from inside the White House — and the processes involved — is no less gripping.The definitive insider’s account, The Haldeman Diaries is both meticulous and candid as it charts the Nixon Administration, putting it into a more complete perspective.Praise for H R Haldeman:'The most shattering political book of the decade.' — The Daily Mail'Ought to be required reading for every student of American politics.' — The Sunday Times'Haldeman’s book does not disappoint; it is as nasty a portrayal of a nasty politician as one might expect …' — New Statesman'The book is fascinating and needs to be read not only because of the unexpected insights of the White House but also because it goes a long way to explain America’s continuing political malaise …' — The GuardianH. R. Haldeman (1926-1993) was White House Chief of Staff to President Richard Nixon between 1969 and 1973. He was also the author of The Ends of Power — about Watergate —written whilst serving a prison sentence for perjury. In the years that followed he became a successful businessman.