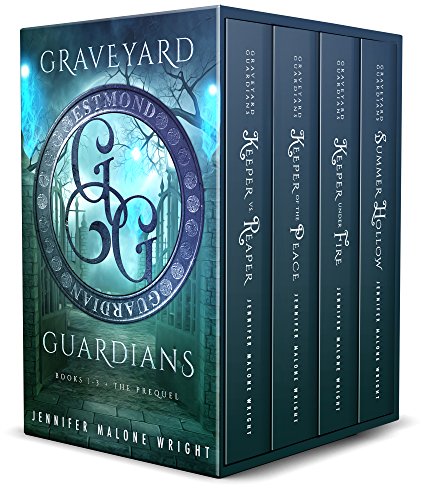 They protect souls ... but forget to protect their own.
*INCLUDES BOOKS 1-3 PLUS PREQUEL NOVELLA*
This series is intended for an 18+ audience
With over 200 five star reviews and over a thousand ratings, find out why readers call this series Romeo and Juliet with a paranormal twist.
Book 1:
When her father died, Lucy Mae Estmond inherited the family business. She has known all of her life that she would be in line to watch over the souls of the recently passed, keeping them safe from the Reapers.
The soul eating Reapers have been a plague upon the Earth, stealing souls and leaving the Keepers as the only thing that stands between Heaven and Hell. The factions despise each other and have warred for generations.
Then Lucy discovers an ancient legend predicting the arrival of the Chosen One, destined to bring forth an end to the Reapers. The surprises continue when she realizes she is that person. For Lucy, being the Chosen One doesn’t change much. Fighting Reapers is just another day in the life of a Keeper.
When she meets Jack Walker, they both realize they have an insane, mutual attraction. Too bad that he’s been sent to prevent the prophecy from coming true. His only mission: to kill the Chosen One.
Book 2:
The love of her life left her long ago, shattering her heart into a million pieces. It’s taken Hannah almost twelve years to push away the hurt and move on with life. That is, until the death of a Reaper brings Detective David Foster back to town and their paths cross once again.
With more and more of the soul-eating Reapers passing through town in search of the Chosen One, who happens to be her sister Lucy, the Estmond family has been busy enough. Now, they rally together in hopes of keeping Hannah out of prison.
With all the trouble lately, being a Keeper, a protector of souls, has never been more difficult for Hannah. Will she forgive David and rekindle their relationship? More importantly, will he find out she is the one responsible for the murder he is investigating?
Book 3:
The Reapers are coming…
The Keepers are ready to fight … to defend their home and the souls, no matter what the cost.
Olivia Estmond is tired of waiting to be attacked. It is time for the Keepers to strike first against the Reaper Empress. Preparing to fight is not a new concept for Liv, but living with a target on your back is not something she has ever dealt with. The Reapers were ordered to take out the entire Estmond family, and unless the Keepers did something about it, they wouldn’t stop until their mission was complete.
Not long ago, Aiden was a high-ranking soldier in the Reaper Army, but now he has fallen from grace in the eyes of the Empress. More than that, he wants his best friend back. He grew up with Jack and the two were once like brothers. Now, more than ever, he needed his brother. However, what he didn’t expect from becoming a double agent, was the attraction to a sexy red headed Keeper that came with the job.
Summer Hollow - Prequel Novella
Killing Reapers is just another day in the life of a Keeper.
Kat Davenport spends her nights guarding souls and attends high school by day. The Bay Area graveyards are a hot bed for Reaper activity and slow nights are rare. She is good at what she does and loves every minute of it. But when she and her father are suddenly reassigned to the blink and you’ll miss it town of Summer Hollow, she is far from happy about the move.
Gregory Estmond has taken over the graveyard in Summer Hollow. His family has guarded this Graveyard for generations and now it was all his, or so he thought. Another Keeper has been sent to help him until he comes of age. Which would be totally fine, but it wasn’t just one Keeper, his daughter arrived with him. Kat was loud mouthed, inappropriate at times and fearless. Two out of three of those things were completely the opposite of him.