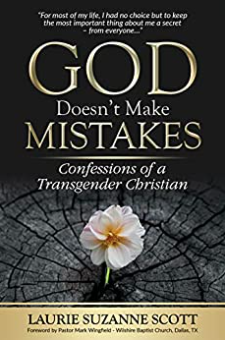 What do you do if you are an evangelical Christian, politically conservative AND transgender?Evangelical Christians are often attacked by the Left. People who are transgender are often attacked by the Right. It’s human nature to align with those who share our world view, and dismiss those who don’t.There is a struggle going on in our culture that produces more victims than champions—we all seem to agree on that. The growing divide between the political, ideological Left vs Right and Religious vs Secularist is so sharp that even attempting to bridge the gap is a perilous endeavor.But what happens to the people who are scorned by both sides? Shut out by the Left for their conservative views. Rejected by Christians for being transgender.Meet Laurie Suzanne Scott. She is, indeed, both an evangelical Christian and transgender. Raised in a devoutly Christian home, she endured the unbelievably difficult and complicated odyssey of finding her identity as a woman …without losing her identity in Christ. A journey she barely survived.In "God Doesn't Make Mistakes: Confessions of a Transgender Christian" Laurie tells her story of growing up playing a role as unnatural to her as the body she was born with. She was a living, breathing dichotomy… and there was no one who could understand. She had no choice but to keep up the pretense and keep it a secret.She became a good son. A good Christian. And eventually even a good husband. She knew if her true identity became known, she would lose everything. E.V.E.R.Y.T.H.I.N.G. So, she kept her secret from everyone. But she knew there was no keeping it from God.Raised with a doctrine she believed condemned her, she decided the only way out of her constant misery was to end her life.“Who would even want to stop me?” “Wouldn’t it be easier for everyone this way?” It was at that desperate crossroad she heard the voice of God simply say, “You’re okay.”Since that day, God has led her on a path to heal her deep wounds of rejection by family as well as other Christians, and make peace with the way she was created.“I thought God would be the first to reject me. But, in fact, He was the first to accept me.”Now Laurie reaches out to Christians who are transgender, who are still struggling to believe God loves them for who they are… just as they are. It’s a difficult and often emotionally exhausting ministry. Equally important are the efforts to help the Church see their Christian brothers and sisters who are transgender as simply, their Christian brothers and sisters. Nothing more, and nothing less.And finally, she shares the much needed message that God doesn't make mistakes, and it IS possible to be a conservative, a Christian, and transgender.