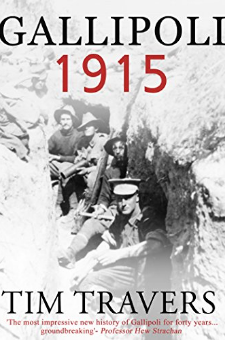 Why was the Allied naval assault of 1915 such a failure? Did the Ottoman Turks know about the Allied landings? And did Sir Ian Hamilton, the overall commander of the Allied forces at Gallipoli, really blunder by intervening at Suvla?These questions, and the key issue of why the Ottoman Turks won the Gallipoli campaign – or why the Allies lost it – have never been satisfactorily answered. ‘Gallipoli 1915’ aims to answer them, while also telling the dramatic story of what actually happened through the voices of British, Australian, and Turkish soldiers who took part in one of the hardest-fought battles of World War One. In order to understand the bloody events of 1915, Tim Travers is the first historian of Gallipoli to use the Ottoman archives in Ankara to tell the other side of the story. This startling new interpretation of the 1915 conflict is a challenging analysis of the enduring mysteries of the Gallipoli campaign.‘The most important new history of Gallipoli for forty years… groundbreaking’ – Professor Hew Strachan‘The Gallipoli campaign of 1915, the ill-fated attempt by the Allies to knock Turkey out of the First World War, continues to grip our imaginations... Tim Travers’s Gallipoli 1915 is the most balanced history of the campaign yet published... a must read’ – Gary Sheffield, Military Illustrated‘The most important aspect of this work is the complete integration of the Turkish (and German) side of the story into the more familiar Allied narrative... masterly’ – John Lee, The Journal of Military History‘Compulsive... citing much hitherto unpublished evidence from the Turkish side’ – Malcolm Brown, BBC History Magazine‘The first to incorporate research from the Ottoman Turkish archives’ – History Today‘An extremely rewarding book’ – History: The Journal of the Historical AssociationTim Travers is Professor of History at the University of Calgary in Canada. His great uncle was killed in action at Gallipoli and the author has dedicated the last five years to finding out what really went wrong for the Allies in 1915. His other books include the widely praised ‘The Killing Ground’. He has also contributed to ‘The Oxford Illustrated History of the First World War’ and ‘The Oxford History of the British Army’. He lives in Canada.