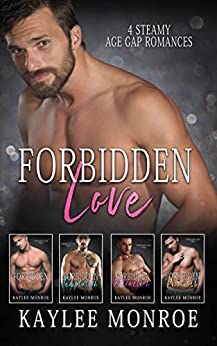 A COLLECTION OF 4 STEAMY AGE GAP ROMANCES
FORBIDDEN CRUSH:
I’m her boss, her father’s best friend, and far too old to want someone as young as her.
When my best friend asked me to hire his daughter who was down on her luck, I didn’t hesitate to extend the offer, especially when I was in need of a new assistant. At twenty-three, she was young and vibrant . . . and far more irresistible than the young, teenaged girl I’d remembered her to be.
Hiring Ashley was the best and worst decision of my life.
The best decision because Ashley proved to be an amazing, invaluable assistant, anticipating my needs as her boss before I even expressed them.
The worst decision because she was temptation personified, and when she made the first move and kissed me, I cracked under all that sensual tension and took everything she was offering, and more, until we were both too far gone to turn back.
All hell breaks loose when her father finds out . . . but that’s nothing compared to the unexpected bombshell Ashley drops on me that changes everything.
I’m going to be a daddy.
FORBIDDEN TEMPTATION:
Retired Marine, Manning Reid, had been my father’s best friend for as long as I could remember. But now, with my father gone, I’m left to run his beloved bar, Sullivan’s. I’m also stuck working with a hot, tough, impenetrable man I haven’t seen in years who has a way of making me desire things that should be forbidden between us.
Manning is grumpy, over-protective, and built like sin. A veritable daddy . . . one who refuses to see me as anything more than the little girl I’d once been, no matter how hard I try to convince him otherwise.
He has a way of pushing all my buttons, so I push back harder, and end up unleashing all those dark, sensual cravings he can no longer deny. It’s everything I’ve ever wanted from him, and more.
I want to be his, but Manning insists I’m too young for him, that I deserve so much better than a man as jaded as him.
That’s where he’s wrong . . . he’s the perfect man for me, and I’ll do whatever it takes to prove it.
FORBIDDEN ATTRACTION:
Ever since I was a teenager, I’ve had a thing for my best friend’s hot dad, Sutton. Now that I’m in my twenties and he’s divorced, there is no denying our attraction, despite our almost twenty year age gap.
Except Sutton is hell-bent on being a good guy and keeping things platonic between us.
What he doesn’t count on is my single-minded determination to be a bad girl and seduce him, until he can’t resist me any longer.
When we find ourselves stranded at a resort and sharing a room, nothing will stop me from finally getting what I want. Sutton is everything I’ve fantasized about, and more, but when he’s forced to make an impossible decision, will he choose me, or walk away from everything we could be together?
FORBIDDEN PROMISES:
I never would have imagined being trapped in an elevator with my father’s best friend would ignite desires that we both were unable to deny. But all that lust between us came tumbling out, and despite our scorching hot attraction, and even steamier tryst, I swore it was a one-time thing.
Never to happen again.
At least that’s what I told myself.
Kurt, however, didn’t feel the same.
He was possessive and deliciously dominant, leaving no doubts in my mind that regardless of our age difference, and him being a long-time family friend and his daughter being my bestie, that I was the woman he wanted.
I found myself in his bed on a regular basis, until I felt utterly consumed and addicted to him. And even when I swore it was the end, there was no walking away from this man . . .
Because Kurt Blackwell was now my baby daddy.