Fighting For Her Dragon 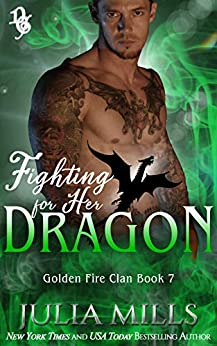 There Are No Coincidences….Given a fairy tale life by the clan of dragon shifters that rescued her as a little girl, Emma Sinclair long ago accepted she might never solve the mystery of her heritage. Of course, that was before she could feel the traitor’s pain, before she knew he was slipping away. And before the unthinkable happened… he called to her in the language of his kin. The Universe Does Not Make Mistakes…Captured by his brothers. Imprisoned in a cave. Bound in silver chains. Andrew knew his days were numbered. He accepted his fate. Knew he was getting what he deserved. Hallucinations of his long dead parents were his only solace in the debris of a wasted life. Then the daffodils entered his prison. The fragrance stirred visions of expressive brown eyes, a smile that rivaled the sun and a voice that was a balm to his tattered soul. He clung to the memory of her. She became his lifeline…his only hope of survival…Fate Will Not Be Denied…One doomed dragon. One very special woman. One destiny no one could have predicted. Will they save dragon kin or destroy it?Book 7 in the Dragon Guard series. The books can be read as stand-alone stories, but these Dragons are better when binged. Can't wait to hear what you think of this story. XOXO, JuliaThis book contains explicit sexual material and violence. It is only suited for mature readers 18 years of age and older.