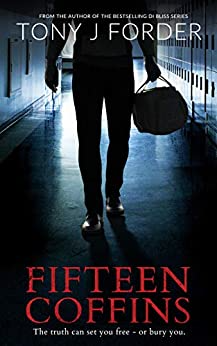 From the bestselling author of the DI Bliss series comes an enthralling mystery thriller.

The truth can set you free – or bury you.

When FBI Agent Sydney Merlot returns to her home town in northern California to wind down her late father’s PI business, she soon finds herself on the wrong side of the aftermath of a high school shooting.

Sydney’s childhood friend – who is now county sheriff – plus the local PD, the mayor’s office, and most of the town’s inhabitants, are convinced the horror ended when the gunman was killed. Now they just want to be left alone to mourn. But Sydney has other ideas – and she is not alone.

While having to work through her own personal grief, Sydney is openly intimidated and receives anonymous threats. After discovering she is under surveillance, she begins to fear for her life. During her investigation she gains several allies, but as the days pass, Sydney doesn’t know who to trust, and which new friends might actually turn out to be foes...

“The crime was a perfect catalyst for the rest of the impressive story line and had some exciting twists- there were times of pure drama, light hearted moments and tears of emotion.”

“I was sucked into the plot from the beginning and therefore stuck between racing through to the conclusion vs slowing down not wanting the book to end! Fabulous!”

“Tony Forder is genius. This book is totally unique, I have never read anything like it.”

“Wow what a read! A powerful story dealing with an emotive subject yet handled so brilliantly.”

“Another 5 star read from Tony Forder.”

“Tony is a natural storyteller and I really enjoyed losing myself in this book.”

“Edge of your seat suspense.”

“This was a compelling and fabulous read.”

“The plot leads us from each shocking surprise to the next with little time to gather breath in between.”

“It is a terrific story and is as skilfully written as Tony's other books.”

“An edge of the seat reading experience that shouldn't be missed!”

“As with any of Tony's books you know you’re in for a treat.”

“Fifteen Coffins is for me Forder's greatest work to date ...and another of my top reads this year.”

“I couldn’t get enough of this book, it’s one of those that you just want to read one more chapter!”

“This book doesn't give its secrets away easily, and that's what makes it amazing, brilliant and at times harrowing.”

“Five stars from me and let’s hope there will be another book.”