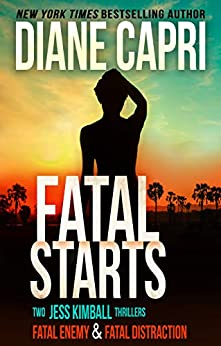 Special Edition. Special Price. Limited time. They stole her son. She wants him back.Bestselling JESS KIMBALL SUSPENSE THRILLER SERIES Begins Here. From award-winning New York Times and USA Today Bestselling Author DIANE CAPRI.Introducing Jess Kimball, the relentless mother on a mission to find her son. Peter was stolen. She wants him back. While she searches, she's helping other families get justice.Fatal Enemy - Richard Martin seduced Jess Kimball and left her alone and pregnant. Jess and her son got away. Another woman wasn't so lucky.But Jess isn't sixteen and gullible anymore. Too much has happened to her since then. The struggle to make ends meet as a single mother, her son's abduction, and the time trying to get him back. If Richard thinks for a moment he can manipulate her again, he has another think coming.Richard has abducted his own daughter and Jess won't stand for it. Not again. She's Richard's enemy now, and he is hers. But her missing son is also his child. Did Richard take Peter, too?Fatal Distraction - Jess Kimball's son has been missing for ten long years. She spends every available moment looking for him. She'll never stop. And never give up hope.She knows the best chance she has to find Peter is a tip from someone who's seen him.To keep her search in the public eye, hoping for the right tip to come her way, she's climbed to the top of her field, investigative reporter for Taboo Magazine.Which is how she met beloved Florida Governor Helen Sullivan...Three years ago, Helen's world shattered when her only son died in a senseless car crash, killing his best friend, too.Helen quickly discovered Eric's crash was no accident and lured the killer to her son's funeral to be caught. When the shooting ceased in the small country church, the shooter was dead and Helen believed her nightmare was over. Instead, she'd unwittingly escalated her duel with a cunning and patient assassin.Now, Jess and Helen are driven to find the horrifying truth. Who killed Eric Sullivan? Is the real killer still out there?For fans of Melinda Leigh, Kendra Elliot, Robert Dugoni, Mary Higgins Clark, Greg Iles, Karin Slaughter, Lisa Gardner, Lee Child, Jack Reacher, John Grisham, and James Patterson's Women's Murder Club"Full of thrills and tension - but smart and human too." -- Lee Child, #1 World Wide Bestselling Author of Jack Reacher Thrillers"Expertise shines on every page." -- Margaret Maron, Edgar, Anthony, Agatha and Macavity Award Winning MWA Grand Master and Past President"Relentlessly determined to bring justice to an unjust world, Jess Kimball is like a female Jack Reacher, only nicer!" -- Martha Powers, award winning author of Conspiracy of Silence and Death AngelReaders Love Jess Kimball and Clamor for More!"Smart, fast-paced, personal and, dare I say, thrilling. It's the kind of "this could happen to me" thrill that really chills me to the bone if I think about it too much. I could not put this book down until I found out if everything was going to turn out okay. Does it? Well you'll have to read it and see!""Highly recommend-- kept me on the edge of my seat and I had a hard time putting it down-- Great characters and storyline-- I do want more!"Start reading now with this special price for a limited time on the first Jess Kimball Thrillers and you'll be hooked by the twists and turns, emotion and heart. You'll read all night. But lock the doors first. These books are nail biters.