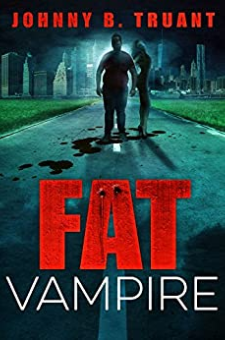 The SMASH HIT SERIES now being developed at SYFY channel -- coming soon from NBC/Universal!Death Has a Brand New Appetite...When overweight treadmill salesman Reginald Baskin finally meets a co-worker who doesn't make fun of him, it's his own bad luck that tech guy Maurice turns out to be a two thousand-year-old vampire.And when Maurice turns Reginald to save his life, it's just Reginald's further bad luck that he wakes to discover he's become the slowest, weakest, most out-of-shape vampire ever created … doomed to "heal" to his corpulent self for all of eternity.But as Reginald struggles with the downsides of being a fat vampire (too slow to catch people to feed on, mocked by those he tries to glamour, assaulted by his intended prey and left for undead), he discovers rare powers in himself that few vampires have … and just in time, because the Vampire Council wants him destroyed as an inferior representative of their race.Read the first book of Johnny B. Truant's blockbuster series, and you'll never look at vampires (or vampire stories) the same way again.????? "Laugh out loud funny and the laughs just keep coming. I am in for the whole series because I need to know what happens next to Reginald, the Fat Vampire. It is absurd, and yet oddly comforting and believable that even the Vampire world has out of shape and awkward individuals." -- AJ????? "I love a good vampire novel and Johnny B. Truant delivers on all levels. Humorous, suspense, action, gore, love story... it has all of these and excels at them. Twists and turns near the end of the story had me shouting out loud in my head towards certain characters and cheering Reginald, Maurice, and Nikki on! Looking for a new vampire story to sink your fangs into... buy this book!" -- Christian Burch????? "Truant has authored the most unique vampire novella I have ever read... I sincerely predict The Fat Vampire would become a most popular television series when producers learn of Truant' s work." -- vinnieg????? "Just when you think you'll never find a vampire novel again that doesn't involve bloodsuckers that look like they moonlight at American Apparel, here comes Reginald, 350-lb. office worker who, because he's in the wrong place at the wrong time, is turned into a vampire; now he's destined to be the out of shape, fat slob he's been all his life... forever. What, you thought he'd suddenly turn into Edward Cullen?" -- Phoenix59????? "Reginald is a very relatable character. He's been hammered down his whole life because of his weight, and he just doesn't see an end in sight. Even after being turned into a vampire things are looking down. But despite everything he perseveres. Having grown up over-weight myself I felt this character was a great role-model, despite a few instances where let his stomach make decisions for him." -- Michael LoringPerfect for fans of Rick Gualtieri's Tome of Bill series or Drew Hayes' Fred the Vampire Accountant series, Fat Vampire is the story of an unlikely hero who, after having an imperfect eternity shoved into his grease-stained hands, must learn to turn the afterlife's lemons into tasty lemon danishes. Click to start your new favorite series.