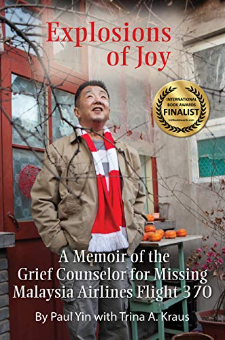 Paul Yin's memoir has been honored as an Award Winning Finalist in the 2018 International Book Awards and has been awarded a Bronze from Dan Poynter's Global Ebook Awards. Read Paul's story as he discusses the events on March 8, 2014, when families went to the Beijing airport to pick up their loved ones and saw “delay” on the arrival boards. Within the hour, they were instructed to gather at a hotel conference room because the plane had disappeared from radar. Paul Yin immediately orchestrated counseling for all those involved by connecting them to insurance/EAP if they had it, trained counselors on the spot, and conducted his own sessions. He was the face on all the newscasts (CNN, Anderson Cooper, NBC, and many other international news outlets) as an advocate for the families. Paul's memoir details the events of his life, including his fight to change the culture of China in regards to the field of psychology, that led him to play that prominent role in one of the most devastating and mystifying tragedies which left a wound felt by many around the world.