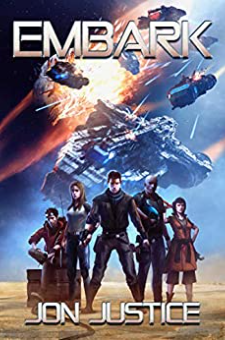 An industrial accident triggers armageddon, forcing humanity to evacuate the planet. Can five friends stop a corporate madman, bent on tyranny with a fleet of deadly starships at his disposal, before it’s too late? Air and space flight culture has replaced car culture. For mechanic Taft Gaurdia, all he wanted was to impress headstrong pilot Kaytha Morrow. Saving humanity was not part of his plan. As Earth spirals toward devastation, Taft and Kaytha make a shocking discovery, and with it a secret, that could change humanity's fate forever. Now, the ruthless Sint Argum will stop at nothing to possess the only thing that stands in the way of total domination. The hunt is on, and the clock is ticking. Can Taft, Kaytha, and their friends unravel the mystery and survive long enough to save the evacuees of Earth before it's too late?(All new edit edition) EMBARK: Book 1, in the action-packed, sci-fi, space opera series. If you like Star Wars, Ready Player One, and Battlestar Galactica, you'll love EMBARK by acclaimed storyteller Jon Justice.Join the adventure, pick up EMBARK today! What readers are saying about EMBARK:"Give these books a chance, and you won't be disappointed." - Amazon Customer."Suspense, adrenaline, and a high-octane space adventure" - Josh H."...by the end, you'll be wanting the next one. EMBARK is a great series." - Kindle Customer."Great book reads like a movie." - E.L. "If John Hughes made a disaster film in the style of Star Wars, this would be the book." - Kindle Customer.The EMBARK Series Book 1:  EMBARKBook 2: Treasure in DarknessBook 3: The Vanishing War Book 4: An all-new EMBARK Adventure, November 2020Book 5: Coming early 2021