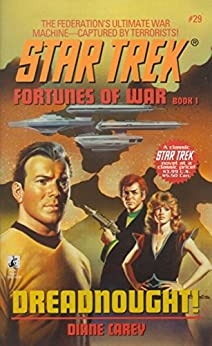 Captain Kirk and the crew of the Enterprise™ match wits with fanatics within the Federation itself as they attempt to stop the commander of a new super-weapon, a dreadnought, from provoking a war with the Klingons.Star Empire is the Federation's most powerful new weapon—a dreadnought, first in a class of super-starships— capable of outgunning a dozen Klingon cruisers, or subduing a galaxy. On the eve of her maiden voyage, Star Empire is stolen by terrorists who demand a rendezvous with the Starship Enterprise™—and with Lieutenant Piper, stationed aboard Kirk's ship on her first training cruise. Now Piper must discover why her friends from Starfleet are among the terrorists...and why they insist the ship was stolen not to attack the Federation—but to save it!